In 2015 Obama sent his council of economic advisers out on a fact finding missions to discover why job creation was so hard for the administration and this council - made up of a bunch of Democrats, right - not ideological free marketeers - concluded that demands for mandatory occupational licensing were creating terrible cartels, excluding workers and getting in the way of regular people wanting to start up businesses.

On the back of people's justified fears of disastrous bridges being built by unqualified tradesmen and hapless patients being sliced open by quacks, government - with the help of protected industries - have managed to sell the myth that mandatory occupational licensing increases the safety and quality of services. People assume that if the government says its fixed its fixed. The reality is that mandatory occupational licensing far reduces the number of practitioners operating in any sector, and when consumers have less choice they have to take whatever they can get at whatever price they have to pay. As a result the quality of services can actually go down and prices up.

This is borne out by the empirical data:

After compiling a meta-analysis entitled, "Rule of Experts," S. David Young concluded “…most of the evidence suggests that licensing has, at best, a neutral effect on quality and may even cause harm to the consumers... The higher entry standards imposed by licensing laws reduce the supply of professional services…. The poor are net losers because the availability of low-cost service has been reduced.”

Stanley Gross of Indiana State University, had to concur, “…mainly the research refutes the claim that licensing protects the public.”


On a free market, the poor may have to sometimes settle for inferior services - but often that is better than no service at all which might be what they otherwise receive. Even so, the price of most services will come down over time if a multiplicity of firms are offering similar services: if not in price then in real terms as wages rise. There are more risks though. When people can’t buy services they might try to do their own work, their own electrical work, plumbing or dental work, this has often happened in the past, and sometimes the consequences can even be fatal.

Still, most people find it difficult to imagine how society might be protected from quacks without government-mandated occupational licences, so lets have a quick review of some of the market can account for this:

Market Competition. Consumers provide a large degree of regulation over markets by not repeatedly buying poor services and advising other customers of what to buy and what not to buy.
Consumer Watchdogs. Customers want to know which services offer the best value for money and are quick to consult experts in magazines or online for good information before they choose a provider.
Employer Discretion. Employers do not want to take on a poorly qualified civil engineer or plastic surgeon.
Registration. Third parties or groups of experienced practitioners can create registries of bonafide service providers. If a complaint is lodged against someone on the registry the administrators can investigate the case and strike them off if they are guilty or give them a warning.
Private Certification. In the absence of mandatory government licensing consumers will often want assurance from credible sources that the services they are going to pay for are of high quality - and more importantly - safe. Third parties can offer to certify practitioners that meet their standards.
Litigation. Customers already have protection under the law against faulty products or false advertising even in the absence of mandatory occupational licensing. The threat of being sued for causing damages is enough to deter most companies from releasing harmful products, if the threat of killing off their customers is not enough already.
Contracts. Customers can make explicit contacts with service providers to ensure they have recourse if they don't get what they think they are getting. If a company says the customer is getting x but gives them y the contract clearly delineates who is in the right and who is in the wrong.
Bonding. Individuals can engage in agreements in advance that involve third parties to ensure that payment is transferred when it is supposed to be.
Insurance. Customers can insure themselves against receiving faulty goods or receiving harm from services. In some cases the insurer will be able to bring litigation against the service providers for damages incurred offering a deterrent against providing poor services.
Jail. If the fact that it is not profitable in the long-term to kill of your customers is not enough to deter greedy capitalists from selling products that are physically harmful, the prospect of a jail term just might be. 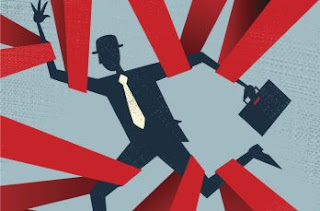 Occupational Licensing simply come down to the government abolishing someone's right to provide services to someone else who is willing to buy those services, and then selling it back to that person at a fee. This is usually at the cost of several years in some educational institution where education in the necessary skills is dragged out over several years and supplemented with a whole bunch of written work that is superfluous to the exercising of those skills. The sum result of these policies are to drive otherwise capable people out of their passion because they are not academic, can't afford the education or the time off work, or can't look at another educational institution after the horrors of school. Willing students are saddled with debts and loss of work experience while they study and expect to recoup expenses from customers. All of this drives up the cost of products, reducing living standards for average people.

We see a real problem with this with the FDA when they allow highly dangerous foods - and people presume "the government has taken care of it, if it was dangerous it would be off the market" - when the opposite is the case. They have also held (and continue in some cases to hold) life-saving drugs off the market for decades at the expense of countless lives. They also have the monopoly on this service so it's impossible to compare their performance with any other agencies that might have had a much better record of making good judgements of food and drugs. With a multiplicity of firms acting in the sector you could compare their history for a sense of which might be the most reliable when it comes to what.
Posted by Antony Sammeroff at 10:09