One of the most persistent myths about 3rd World Poverty is that if underdeveloped nations are allowed economic advancement and become wealthy it will be some kind of unmitigated environmental disaster. Is that so?

Wealthy countries can afford to clean up their water supplies after fouling them and treat their sewage properly. They can replant their forests, put recycling infrastructure into place, and farm sustainably. Countries without wealth can’t do that. In places like Bangladesh people must scramble to make a living with no long-term consideration to their surrounding environment, and they have no means of repairing it afterwards. Starving Brazilians have little choice but to cut down the rainforest when they can hardly afford not to. A lack of a just legal system, economic freedom and property rights1 prevent some of the world’s poorest countries from diversifying their economies, leaving them to rely on the exploitation of natural resources to generate income. As these nations develop they attain the means to establish other sources of revenue that don’t simply involve digging things up and selling them.

As economic growth first sets in environmental degradation can worsen for a time but soon environmental health indicators (such as water and air pollution) tend to reduce.2 Environmental pollutants, such as sulfur dioxide, nitrogen oxide, lead, DDT, chlorofluorocarbons, sewage, and other chemicals previously released directly into the air or water are found in far lower levels.3 Once per capita income reaches about $4000 in a nation, people begin to demand a clean-up of their local streams and air. Among countries with a per capita GDP of at least $4,600, net deforestation has ceased to exist.4 Europe’s forests have grown by a third over the last 100 years.5

According to Hans Rosling, sustainable global development advocate, the richest billion people in the world are responsible for 50% of the world’s consumption of resources, the 2nd billion for the next 25%, and the third billion for the next 12.5%.6 This means that the 2 billion poorest people in the world could easily be raised to the standard of living of the 3rd or even 4th poorest with very little environmental impact at all.

Western Nations can help by establishing free trade with the world’s poorest countries and importing their produce in order to help their economies develop faster. Cheaper produce would also mean better living standards for people on low incomes at home. The protectionists argue that this would harm domestic farmers (who are already in receipt of considerable state benefits and government subsidies – some of which have been an environmental disaster7) but these farmers would not be starving should they have to migrate into other occupations – people in the third world are! They themselves could benefit from cheaper produce, and are we really expected to put the interests of a small group ahead of everyone else in the country and abroad?

Concerns for the environment regarding “food miles” (how far food has to travel) are also completely misplaced. It is often far more energy efficient to grow foodstuffs in countries with naturally high temperatures which would otherwise have to be artificially raised in colder climates. As Matt Ridley explains, only “4% of the lifetime emissions of food is involved in getting it from the farmer to the shops. Ten times as much carbon is emitted in refrigerating British food as in air-freighting it from abroad, and fifty times as much is emitted by the customer travelling to the shops.”8 Economist Johan Norberg also attests that while 83% of the CO2 emissions involved in American food consumption is used in the production phase, less than 11% is caused by transportation and that it's puzzlingly more environmentally friendly to grow apples in New Zealand and ship them all the way to Great Britain than to produce them locally.9

Some environmentalists believe that growing populations attaining greater living standards in developing countries is a recipe for ecological disaster, but actually birth rates fall to manageable levels only when countries become developed. The industrial revolution created population booms across the whole planet – but in every single country where a reasonable standard of living has been achieved population growth receded; there is no reason to believe that will be any different when it comes to the developing world. Education has played an increasing role and will continue to do so, while current projections predict that the world’s population will level off between 9 and 11 billion, and may even then start falling.

People who don’t have to scrape out a living can get educated, work less in agriculture, factories and more with their minds. Their occupations are not so polluting, and some of them may even be responsible for the environmental innovations of the future. Inventions such as e-mail and the USB Flash Drive have already saved more trees than all of the environmental activism throughout history combined, and a car today emits less pollution travelling at full speed then a parked car did in 1970 from leaks.10 It is clear that innovation is set to play an increasing role in the solution of our environmental issues. Intensive farming techniques have helped save countless acres of rainforest by increasing yields over less land, and soon lab-grown meat from cloned tissue may put an end to our factory farming crises by reducing the massive ecological impact of meat production through fossil fuel usage, animal methane, effluent waste, and water and land consumption. Cloned meat will also produce a positive impact on world health by eliminating the heavy use of antibiotics and preventing the fecal contamination which factory farming currently produces.

Countries where the vast majority of people are engaged in subsistence farming are a waste of millions of minds. They do not have the leisure time to enjoy art, become cultured, innovate, creative, and reach the higher potentials of human flourishing which will allow them to contribute to advances which may help everyone on the entire planet. They are too poor. Farming is of course a fine occupation too, but it should be chosen rather than forced upon people by poverty.

If we really believe in prosperity, we have to believe in it for everyone. Not just those lucky enough to be born into affluent nations. Fundamentally, it’s not economic progress but our irresponsible economic systems which are responsible for the environmental damage we have seen over the last 200 years. Governments can externalise the costs of damaging the environment and redistribute it to the taxpayer, rather than allowing producers and consumers who pollute to pay for the full cost of their choices. We can create sustainable economies by holding individuals and organisations personally responsible in proportion to how much they pollute. These very incentives would encourage people to choose sustainable development and ecofriendly habits far more of the time. 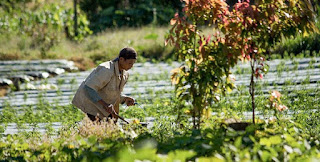 1 Where private property is established, logging companies develop the incentives to look after the sustainability and long term value of their land, and charities can even buy up tracts of land for preservation. At present that is rarely possible as those property claims would currently just be ignored by the loggers and the corrupt governments in those countries

4 Waggoner, P. E. (2006) “Returning forests analyzed with the forest identity.” Proceedings of the National Academy of Sciences of the United States of America, vol. 103 no. 46.

7 For example, the EEC – now the EU – tried a policy of buying everything that farmers produced and couldn’t sell which led to mountains of excess grain being produced that then had to be sold off at knock-down prices to third world countries, causing gluts in their markets which put local farmers out of business and had devastating effects on their economies. Before the policy was reverse countless miles of hedgerows well pulled up to make fields bigger uprooting the natural habitat of countless animals and insects giving way to the bleak, soulless prairies that parts of the UK have becoming. Magnificent wetlands were drained and destroyed to plant more land for crops that no one could sell 95% of the flower-rich meadows, 60% of the lowland heath, and 50% of ancient lowland woods were destroyed in little more than forty years in the UK alone.